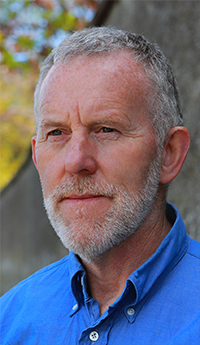 Growing up in Whitegate, on the shores of a busy Cork Harbour, a young John Devoy saw lots of ‘comings and goings’ with horizons always a-beckoning. Though living beside the sea, his activity-interests were firmly terrestrial! After teenage years absorbed in Gaelic football and hurling, in 1980 he took up Shotokan Karate but quickly added caving, potholing, hillwalking and cycling to the list of ‘outdoor’ pursuits. He studied Medical Laboratory Science, becoming a permanent member of staff in Cork University Hospital’s Clinical Biochemistry Dept.
On Fool’s Day, 1985, emboldened by fellow Irish travelers, Dervla Murphy and Tim Severin and inspired by Ted Simon’s tales in ‘Jupiter’s Travels’, he set out on a two year solo odyssey from Cork to North Cape to Cape Town, via Madagascar and ending in Harare, Zimbabwe – 33 countries, 33,000kms and, as he says, ‘long before the tech-umbilical’.
Today he lives on his organic farm in beautiful west Cork, Ireland, with his wife Sara and their three teenage children.
His book ‘Quondam: Travels in a Once World’, forwarded by friends Dervla Murphy and Ted Simon, is the first of a trilogy. It recounts not only the inner rawness and surrealness of that experience but the consequences thereafter.

Riding at last in Eastern Congo